The second Tomb Raider series by Dark Horse was published beginning 17 February 2016. This comic series continues where Rise of the Tomb Raider ended. 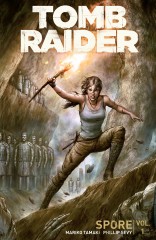 "Lara Croft is pursuing a secret lost truth that leads her to a mushroom said to grant immortality and an organization called The Knights of the Spore who would do anything to keep the mushrooms power for themselves. Laras ingenuity and tenacity for survival will be put to the ultimate test as her search leads her closer and closer to the truth."


Spore is a trade paperback that collects the comic issues 1 to 6 (the first story arc) of the second Tomb Raider Series.

"After Rise of the Tomb Raider, Lara Crofts adventure continues in a new comic series by Eisner Award winning writer Mariko Tamaki (This One Summer)!

Lara Croft is pursuing a lost truth about the world that just might unlock the secret to defeating death! She becomes entangled in a search for a rare mushroom said to grant immortality and a lethal new enemy that just wont die!"  Official Description

"To discover the true nature of the soul, Lara is drawn into a hunt for a rare mushroom said to grant immortality. However, shes not the only one in pursuit--the Knights of the Spore will stop at nothing to take Lara down!"  Official Description

"Lara and Jonah travel to China in search of a cave said to house an immortality-granting mushroom! However, a monsoon, the lethal Knights of the Spore, and disappearing allies and supplies could spell death for them both!"  Official Description

"Fighting for survival in a raging river, Lara must abandon the teams provisions. She is undersupplied and on the trail of the dangerous, immortality-seeking Knights of the Sporeand the looming darkness within the jungle descends!"  Official Description