The Beginning is the first of many comics published by Dark Horse. It serves as a prequel to Tomb Raider (2013): A Survivor is Born and was published on 5 March 2013. 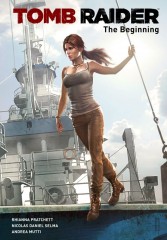 "Join Lara and the crew of the Endurance as they prepare for a thrilling journey to uncover the lost kingdom of Yamatai."

"For over fifteen years, the Tomb Raider adventures have been some of the most enduring and popular in the world of video games. Now, Lara Croft's bold new reimagining is further explored by some of comics' most talented creators in this exclusive volume." -- Official Description