Lara Croft and the Frozen Omen

Lara Croft and the Frozen Omen is a 5-part comic series by Dark Horse.

"It's up to Lara to stop a group of cultists from causing worldwide cataclysmic devastation, and ancient ivory artifacts hold the key to both salvation and destruction! It's a race against time in Laras new quest, filled with incredible action, dual pistols, and high-spirited adventure."  Official Description

Lara in Turkey
When Carter Bell, who has recently taken up falconry, asks her for help, Lara Croft, who is currently visiting her friend in the Antalya Province in Turkey, goes rock climbing to retrieve his lost sparrow hawk. On the sail back to Istanbul Lara enquires into Carter's current research of ivory miniatures.

Lara in Belize
Back home in England Lara is found researching on a computer station in the British Museum when her friend Chris bursts in, reporting that the Croswell Reindeer, a carved prehistoric mammoth ivory, has been stolen from the museum. The two group up with Jon, an elderly gentleman working for the museum and a female security guard as they were the only four people who were in the secure part of the museum while the artefact went missing. They examine the security footage, which shows Jon staring at the artefact. He tells them he had a sudden feeling that the item belonged in the jungle in Belize when he stood there. In the video he is casting a strong shadow on the object, making it hard to see, when the item suddenly disappears.

After they have been questioned by security, Lara decides to tail Jon. When he spots her, he flees, grabbing a cab. She follows him to the airport. There she loses him, but on a hunch she books the next flight to Belize. She remains in contact with Chris back home and tells him that she has picked up Jon's trail. Just when she finds an abandoned Jeep on a dirt road near a hut, her phone rings. It's Carter, but Lara ignores the call. Instead she enters the hut and finds Jon and the Croswell Reindeer. Jon seems a little possessed, snapping in and out of sanity. Finally madness takes over and Lara is attacked by roots grabbing her.

This new comic series is off to a good start. The beginning of the comic focusses of the relationship between Carter and Lara. It becomes clear that the two have become friends, helping each other out, when needed. It is clear that there is more to come and it's probably significant that he called her. Maybe she should have picked up the phone. After all he was researching ivory miniatures, and maybe he knows what it going on with Jon. In-between Lara's story the sinister Mr. Green is introduced. He clearly has his own agenda and possibly something to do with Jon's obsession?

"Ancient artifacts are being collected by cultists planning to cause a natural disaster of world-ending scale! Lara must call on former rival Carter Bells expertise to stop them, and together theyll face danger, action, and adventure like never before!"  Official Description 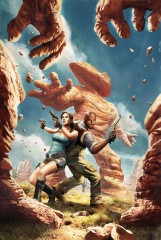 Description:
"Lara and Carter are trapped in an airfield where the only way out is through a hail of bullets! Can they survive this race against time to gather ancient artifacts and keep them away from cultists who would use these treasures to destroy everything?"  Official Description 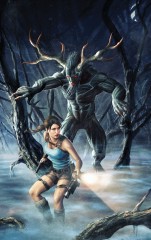 Description:
"The identity of Lara and Carters dangerous new enemyMr. Greenis revealed. The two adventurers use every weapon in their arsenal to stop a cult led by a madman who wants to remake the world ... by destroying it!"  Official Description

Description:
"The identity of Lara and Carters dangerous new enemyMr. Greenis revealed. The two adventurers use every weapon in their arsenal to stop a cult led by a madman who wants to remake the world ... by destroying it!"  Official Description

This story arc starts off in Turkey, where Lara visits her friend Carter and learns about his current assignment: ivory miniatures.

Back home Lara is in the British Museum researching, when strange things happen and an artefact goes missing.

Lara meets fellow adventurer and treasure hunter Carter Bell in Turkey where he has found a new hobby, falconry and is currently researching ivory miniatures.

Chris is a friend of Lara's working at the British Museum. He informs Lara that the Croswell Reindeer has gone missing.

An elderly gentleman working at the British Museum. He is suddenly acting strangely and seems to be linked to the disappearance of the Croswell Reindeer.